We all know about the three trimesters in pregnancy. The first trimester is all about excitement – until the nausea, food cravings, and tender ta-ta’s kick in. Then the second trimester hits, and some of the crappier pregnancy symptoms fade and give way to that baby bump! By the third trimester we’re ready to evict our new roomie, and tired of having to pee every 20 minutes. This is common knowledge for any Mama, veteran or newbie. But what about the fourth trimester?

I’m probably not the first to say that the first three months of motherhood are usually the hardest. We’re so utterly exhausted, and so in need of some real rest so we can start to recover. But this time is also when our babies need us the most. They’ve just done 9 months on the inside, and need a lot of help navigating the world outside. It’s a very demanding time, and we’ve got to be the best we can be on very little sleep. What are the characteristics of the fourth trimester? Exhaustion, exhaustion, and you guessed it – exhaustion.

In those first three months, it felt like I could never keep my baby full. In that time period, the longest she could go without a good feed was just under two hours. And that was just at the end – for the first while I was feeding her every 45 minutes. My boobs were constantly sore or leaking, and they were so veiny that they looked like something out of a horror comic. I felt like a really sad dairy cow. There were times when I felt so exhausted that I would just pray for her to close her eyes so I could cry alone.

For any Mama’s going through this – it gets better. The reason your baby is so hungry SO often is because their stomachs are just tiny. When they’re first born, they can only hold about one teaspoon of fluid in their stomachs. Their tummy’s don’t stretch much in the beginning, so just imagine how quickly they’re becoming full, and also, how quickly they’re becoming hungry again. The good news is, though, their stomachs do begin to stretch and grow over time. So as you both go on, feedings will become more successful, and baby will stay full longer. Hang in there, Mama!

I thought I knew the meaning of ‘tired.’ And then I had a baby. When my daughter was born, I was already more tired as I had ever been in my life. I hadn’t slept much over three days of labor, and I was given some pretty crazy drugs during my cesarean that made it hard to feel awake for days after. I spent two sleepless nights in the hospital after the procedure, and was so excited to get home to my own bed and pass out. Sadly though, sleep was hard to come by for the next little while. It felt like all my baby did was sleep, but whenever I tried to close my eyes her spidey sense would kick in and the fussing would ensue.

I have yet to meet a Mama who hasn’t gone through this. Our newborns sleep all day, and party all night. People tell us to sleep when the baby sleeps, but that’s a lot harder than it sounds. Good news though, this doesn’t last forever. Eventually, your baby will learn to sleep during the night, and will sleep for longer periods of time as well. When our babes are in utero, their sleep schedules are completely reversed. Our movement during the day lulls them to sleep, and when we lay down at night they take that as their cue to start groovin’. So naturally, when they come into our world, they’re used to sleeping during daytime hours and being more wakeful in the night. Fear not though guys, with a good bedtime routine, patience, and A LOT of caffeine, this is a phase that doesn’t last too terribly long.

I was fully expecting a giggling, smiley baby to magically appear shortly after birth. However, what I got was a very stoic, sleepy, hungry poop machine. She didn’t crack a smile, she didn’t coo, and she certainly wasn’t very lively. I still loved the heck out of her, but she really didn’t do much for the first little while. I was a little worried that maybe my baby was bored, like, all the time.

This is completely normal. Babies don’t come out all cute and full of wonder – they come out messy and grumpy. They’ve just been brought into a place where everything is new and confusing. Their cozy house has been replaced by a cold space with far too much room, the sound of Mama’s heartbeat has been replaced with a bunch of unfamiliar and jarring noises, and for the first time, they are experiencing very bright light instead of total darkness. These are HUGE changes, and it’s going to take your babe some time to adjust to their surroundings. They also have a massive amount of development to do before we see that little spark of personality. Trust me Mama, when that babe becomes mobile you’ll find yourself missing the days when they were content in a swaddle.

Hang In There, Mama

To all the Mama’s struggling through the fourth trimester; I promise you it gets better. There is light at the end of the tunnel. I know it’s cliche to say that time goes by so fast with our kids, but it really does. Those first three months (AKA the fourth trimester) were so tough for me that I would actually get annoyed when people would say things like “cherish every moment,” or, “one day you’ll miss this.” I’m not sure I miss those days, but one thing I know for sure is that my kid is only going to be a baby once, and I really am so grateful for every minute of it – even the minutes that feel like hours.

Take Care of Yourself, Mama

To My Little Girl 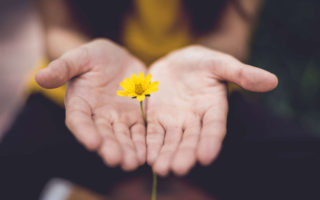 Saying Sorry to your Kids